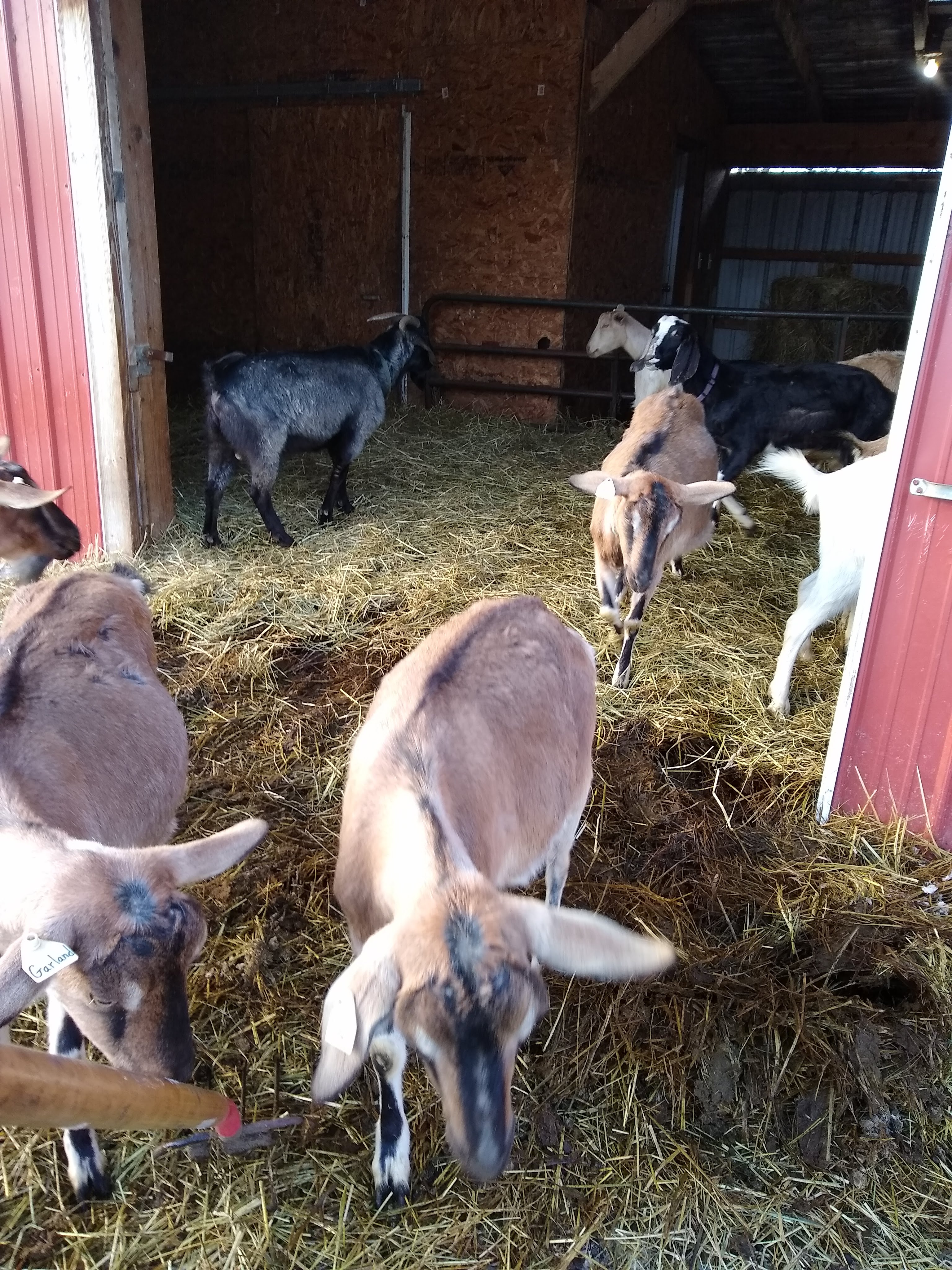 My goats have a bedded pack in their barn. That means instead of cleaning the barn daily or weekly, each day I throw down fresh bedding on top of the manure that has accumulated. This provides a clean spot for the goats to sit, and the buried manure generates heat. A few times a year, I clean everything out and add it to the compost piles.

I consulted my weather app and weighed my options. This job needed to be done, but there is a lot of mud potentially involved. The skid steer creates a wonderful mud party wherever it goes when the weather is damp. I would need it to be cold enough for the ground to freeze, but warm enough that I wouldn't.

I decided that Monday the second was my day. It would have been cold for several days, so the ground should still be frozen. Unfortunately, my dad had a large pile of frozen manure at the end of the cow barn which he had counted on removing before it melted and spread everywhere.

"You can use the skid steer in the afternoon," he offered.

"I hope the ground is still frozen then," I said. I was not optimistic as the day promised to be warm.

Dad finished with the skid steer in the morning, and after lunch he put the grapple attachment on for me. I have tried, but I can never get the hydraulic cables attached.

I began the job. I parked the skid steer outside the goat barn. I locked all the goats in the side paddock, where they usually go after milking. They were not pleased. The paddock was still full of snow, and goats do not like to stand in snow. I tied Bailey the Great Pyranees up in the barn. Then I removed the gate at the entryway.

I got in the skid steer, turned it on, and made my entrance. I made it halfway around the end of the barn and stuck fast in a mix of mud and slushy snow. I watched the wheels of the skid steer spin forwards and backwards, accomplishing nothing. Going sideways was not happening as I was down in the ruts created by previous cleaning days. I used the grapple to push myself backwards, and after several attempts, I was free.

I made a second go at getting around the end of the barn. Perhaps if I came at it fast enough, I could break through the wall of slush and mud that I had created. It wasn't happening. I found myself stuck once more while the wheels spun uselessly. After working myself backwards to freedom again, I decided this was not going to work out that day. I carefully backed the skid steer out of the goat pasture. I replaced the gate and released the goats.

"At least while I have this grapple, I can turn the compost," I decided. The grapple works well for things that don't scoop easily. The compost heaps still have lots of hay fibers in them, so it's easier to grab them with the grapple than to scoop them with the manure bucket. I made quick work of that and then took the skid steer back to its attachment lineup by the cow barn.

I thought if I could not clean the goats' lounge area, I could at least clean the maternity pen. The maternity pen must be forked out by hand into the skid steer bucket. I tried to unplug the hydraulic lines from the grapple to the skid steer, but could not make them move. I had to get Dad to unplug them. I swapped the grapple for the manure bucket and returned to the goat barn.

The maternity pen had become a storage area since the last of the kids were weaned months ago. I had to move all the feed out of there, as well as forking out the manure and soiled bedding from last year. Much of it had become powder and I had to go in search of a shovel.

I was pleased with it when I finished, but had to wait until the next day when I went to Tractor Supply to put lime down. I let the lime sit on the floor for 24 hours, then I brought some sawdust over from the cow barn to put down for the base layer. The maternity pen was ready and waiting for the first expectant mama goats.

As for the rest of the barn, I have been slowly forking it out into piles. Hopefully when the frost goes out of the ground, it will begin to drain and be less muddy. Then I'll have another go at getting the skid steer in there.